Since then, The Free Space school received a financial grant for a ‘Parents Participation in Education Project’. During this Living Values-based project, teachers and parents have been learning about and practising how to bring values at school and at home into alignment.

Part of this project currently is a seminar organised by the school: ‘The power of peace in education’. This will take place on the 21st of September, UN Peace Day. During the seminar our Book of Peace will be presented. This is a compilation of drawings and interviews with pupils, teachers and parents of the school about peace. The children shared beautifully about their naturally felt responsibility to start with peace themselves, and what helps them to achieve inner peace. Their sharing is so creative and wise.

A wonderful circle of people with different competences and from different regions of Holland are now regularly coming together to reflect, exchange ideas and experiences about LVE, and to develop more values awareness. This has resulted in a variety of experiences and projects. 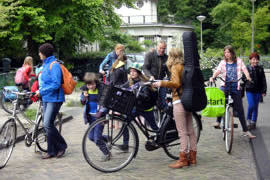 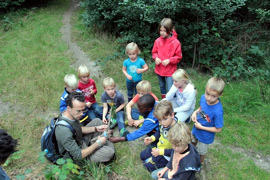 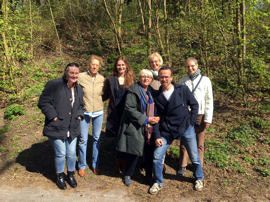 “In 2015, Living Values Education Netherlands joined ‘The Peace in the Park Festival’ for the first time in The Hague,” reported Marlies Ludding van Loon. “In the beautiful park near the palace of the king in the centre of the city, children and their parents spontaneously participated in various activities on ‘peace in our hearts and in the world’. We made peace necklaces, friendship bracelets, peace doves and flags. Meanwhile, we explored how we could deepen the meaning of peace in our own lives, with families, with friends, in class… Thank you Patricia Mosimann, LVE volunteer, for your great ideas and your hard work!” 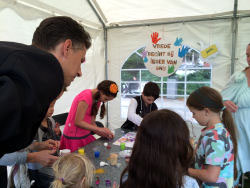 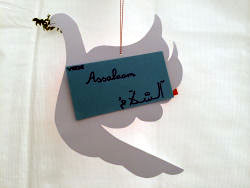 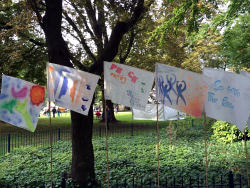 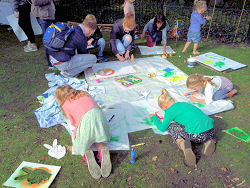 Three More Schools to Implement LVE in The Hague

The democratic school, De Vrije Ruimte (The Free Space), in the Hague has been implementing Living Values Education for the last two years with good results. A few months ago the teachers of the school, with a well conceived and elaborated plan, participated in an education pitch about parents participation in education. They won a price, a solid amount of money, to deepen LVE at their own school and implement LVE in three other schools in The Hague.

The project will especially focus on the following two aspects:

Part of the project is a new Dutch translation of the three LVE Activity books (3 to 7 years, 8 to 14 years and young adults) so that the activities will be more accessible for Dutch education.

The Foundation LVE Nederland will be one of seven members participating in this project. More specifically it will focus on guaranteeing the overall quality of the various contributions by participants. The project starts 1st March and ends 28th February 2017.

We will keep you posted!

We would like to share with you the highlights of the children's project 'ToGether' – a joint effort of OneMelodie (A non-profit organisation for Social Education in Utrecht.), the LVE School 'De Vrije Ruimte' in The Hague, and LVE The Netherlands.

Over the course of this year, from February through August, we brought together two equally-sized groups of children (ages 6-12) of different cultures and backgrounds – two groups that would normally never have the chance to meet and play with one another. One group of children came from a neighbourhood in Utrecht, mainly home to refugee and immigrant families originating from Sudan, Senegal, Ghana and Morocco, and the other group came from the LVE school 'De Vrije Ruimte' in The Hague,primarily consisting of native Dutch children. There were sixteen girls and four boys altogether.

Over several meetings, alternately in Utrecht and The Hague, the children did activities together. For example, they prepared meals, made paintings, played games, danced and sang, they sewed and made all kinds of crafts. In addition, they practiced the songs for the CD in a professional studio. Two values, cooperation and happiness, took a central position and were practised in all activities.

The first meeting in Utrecht, in a community centre, was a happy and open one. We did all sorts of games to remember each other's sometimes difficult-to-remember names. The second meeting at the school in The Hague was quite a challenge for the children from Utrecht. Travelling by train was a completely new experience and the moment they arrived they were quite exhausted. Also some children felt a bit insecure being surrounded by only white children at the De Vrije Ruimte School.

In total, six gatherings were organised. Each time the children felt more relaxed. Each group independently met a few more times. The children were doing their best in all activities – some had difficulty on concentrating. We felt that singing and dancing were their favourite and the best way to learn and to make contact. The collective singing in a real studio with a real microphone later on was an uplifting experience for all.

Next to the children, the project brought about very good cooperation and understanding between all adults involved (i.e. the volunteers, the teachers from De Vrije Ruimte school, professional musicians who helped us producing the CD, and most parents). In the course of the project they all became more excited because they began to understand the need and importance of the activities and they began to see the changes in the children. 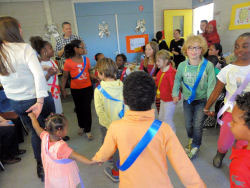 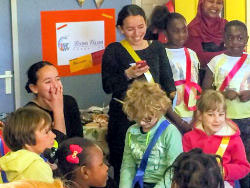 The closing ceremony of 'ToGether' in Utrecht took us (parents and volunteers) by surprise by the great enthusiasm of the children and their elegant way of hosting. The children interviewed each other and the adults about 'cooperation' and 'happiness'. All of them showed tremendous personal growth and gained self-confidence. We danced and sang some of the songs of the new CD – featuring a dozen beautiful children's songs, a poem and two relaxation exercises about values. The mothers of the children of Utrecht spontaneously had prepared delicious sweets and snacks and there was a very relaxed and cheerful atmosphere.

Due to challenges like fundraising and logistics (i.e. the project extended over two cities which made it much more time consuming and expensive because of travel costs…but also more of an adventure!) we were forced to postpone the project and keep it as simple as possible.

We interviewed the children before and we collected assessments after the project. We provide you with some of them:

The evaluation showed that the children were happy that they learned practical things together (e.g. baking pancakes, sewing, making friendship bracelets, singing with the microphone) and that there always was a lot of laughing and jokes. They know now that they are all children 'like me' and they know what to say to connect with children they had not meet before. A few children before the project said that they thought the children of the other group were different. After the project they said that all children are the same; they could not even remember that before they had held another view. Their nicest memory? "That we were dancing and singing together and did not quarrel…"

With the rapidly growth and recent influx of so many immigrants and refugees in the Netherlands more people are beginning to realise that it is increasingly urgent to develop effective programs for integration.

Although 'ToGether' was carried out on a small scale – due to limited funding and challenging logistics – we have great confidence that it will have a follow up on a wider scale and affect the way we think about integration in Holland. Integration programs linked to value-based learning or education are equally important to children with foreign roots as to native children and youngsters; that integration is not a one-way street but a joint effort which brings happiness and understanding to all.

LVE News from the Netherlands

The UNESCO office in the Netherlands invited teachers from the 100 UNESCO schools throughout the country to several workshops, lectures and activities on the subject of “World Citizenship and Peace”. As Marlies Luddding van Loon, the President of the LVE Foundation in the Netherlands reports, “As LVE has been closely connected to UNESCO in the Netherlands since one year we were asked to give a LVE workshop to teachers of mostly secondary schools. A joyful and relaxed workshop took place in April 2014. We all learned a lot, with special thanks to the teachers of Vrije Ruimte, the LVE School in the Hague, who shared from their own experience how pupils love working on values and how this has brought about a lot of joy and awareness of peace and other values in their school. Some teachers wanted more information and we offered to visit them at their schools at a later date for further exchange.” 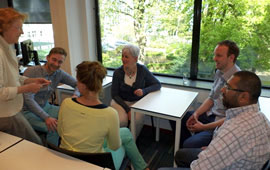 Immigrant and Dutch Children Cooperate – Expect a DVD of Values Songs in December!

The Foundation Onemelodie and a Living Values School in the Netherlands have begun a special DVD project on Values Songs in Dutch. Immigrant children who began LVE activities for children at risk this month, will be singing the soon-to-be created songs with Dutch children. Both sets of children will be engaged in values activities about happiness and cooperation until December. To be composed by two songwriters and planned and organised around the values of happiness and cooperation, the organizers are hoping for happy, cooperative and serious commitment from all involved!

“De Vrije Ruimte, the Free Space, is the first school in the Netherlands to commit itself as a whole school to the Living Values Education Concept,” reported Marlies Ludding van Loon, the President of the Foundation for LVE in the Netherlands. LVE activities began on September 1, 2013. This benchmark has followed a wonderful year of LVE workshops for educators and children for the educators and board of this school in the Hague, as well as LVE workshops to other organizations. 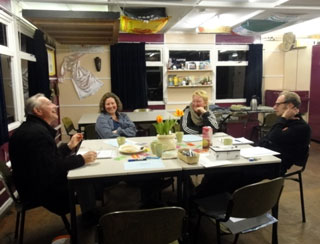 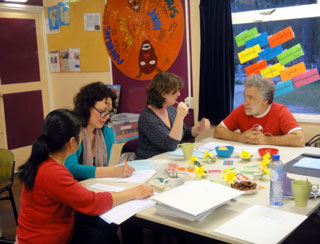 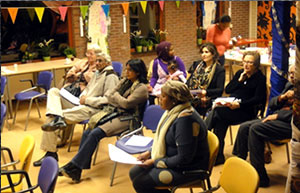 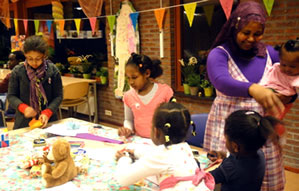 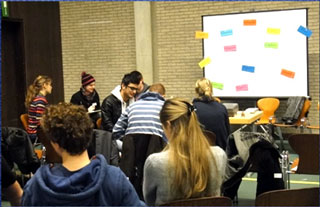 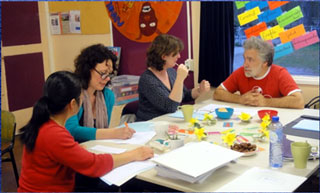 On July 10, the information LVE association became formally incorporated as the Foundation of Living Values Education.

In August, Marlies van Loon attended the general Assembly of ALIVE at Crêt Bérard, Switzerland, and assumed the position of LVE Coordinator/Focal Point for LVE in the Netherlands.

In November, a new group of LVE trainers held their first LVEP workshop for teachers of nursery schools and primary schools in the Netherlands

In 2005, there was a search for a translator and editor for the process of translating the Living Values Education series of five books into Dutch. A meeting was held between Marlies van Loon and Marleen de Jonckheere with BZN (Bond Zonder Naam) in Antwerpen Belgium. They made a decision to cooperate closely. Marleen found funds for the translation of the LVEP books into Flemish/Dutch.

From 2000 to 2004, the LVE working group met at the Hague three or four times a year under the leadership of then LVE Coordinator Karen Derks, with Marie-Lisette Derks, Nanette with the Design Academy Eindhoven, Marlies van Loon and people from a variety of faith groups interested in values education.