Training for Educators in the LVE program - May 2019 - São Paulo

We are very happy! 26 Educators are ready for LVE activities. We thank our Volunteer trainer Cleide Romero. 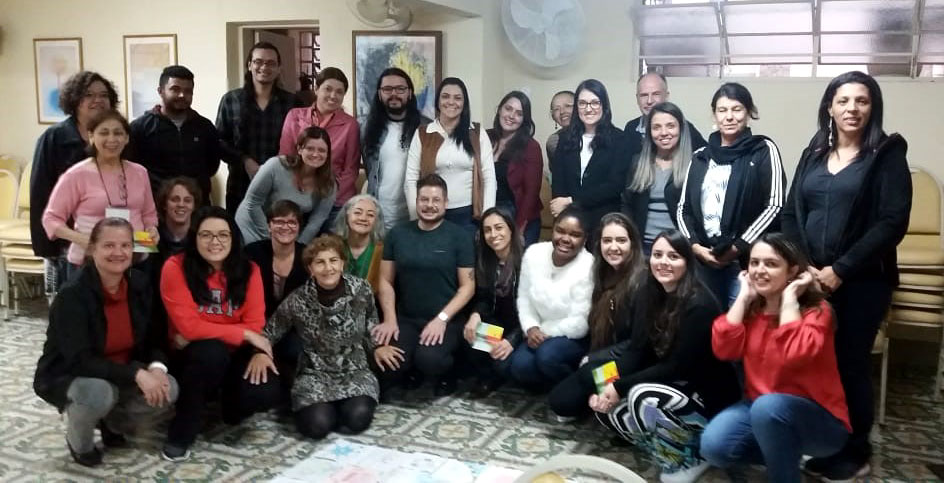 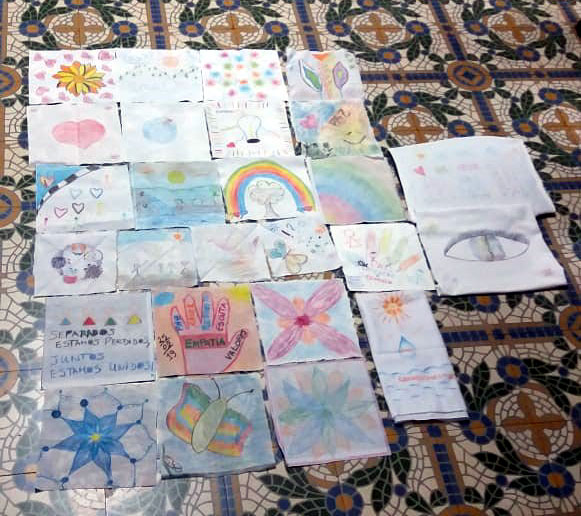 We are grateful to our Volunteer teacher Paulo Barros. 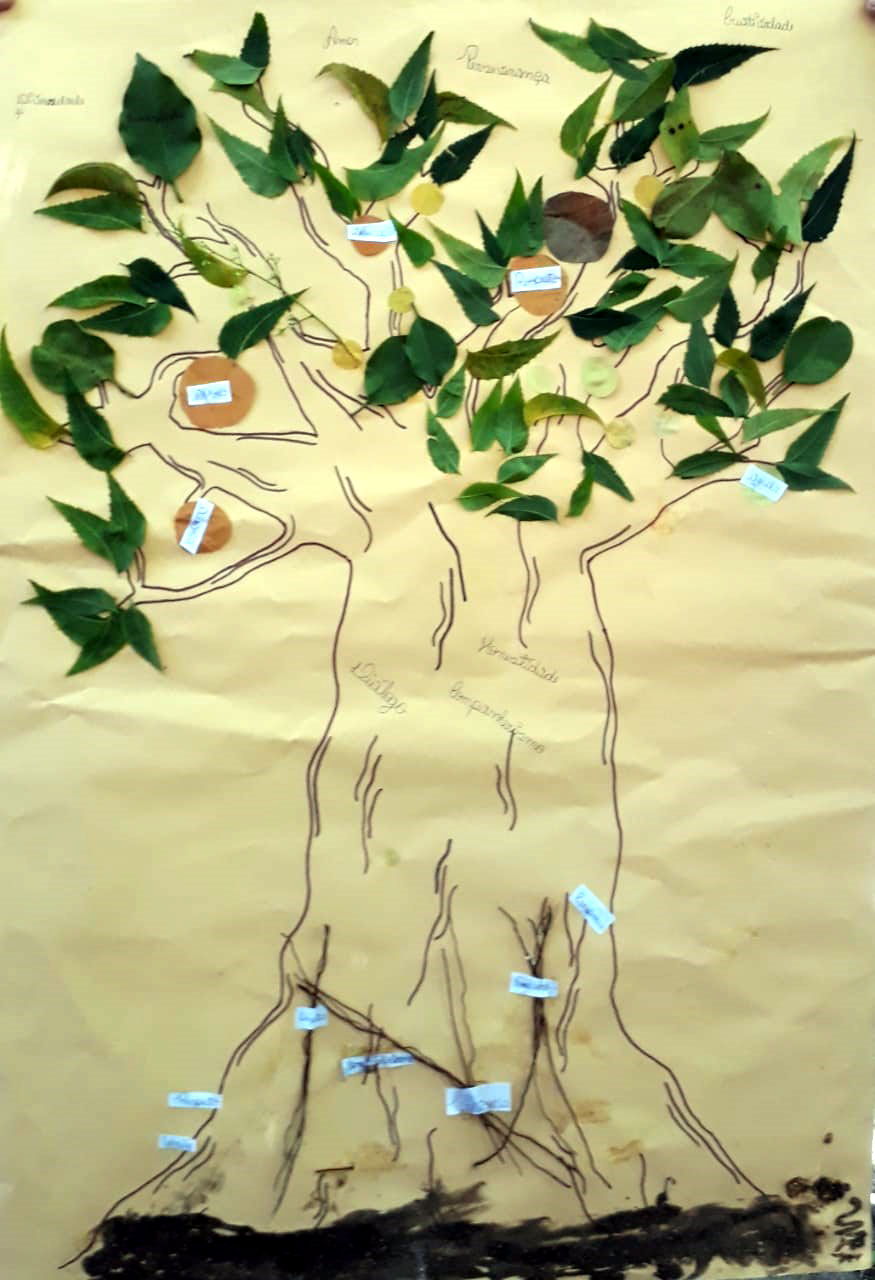 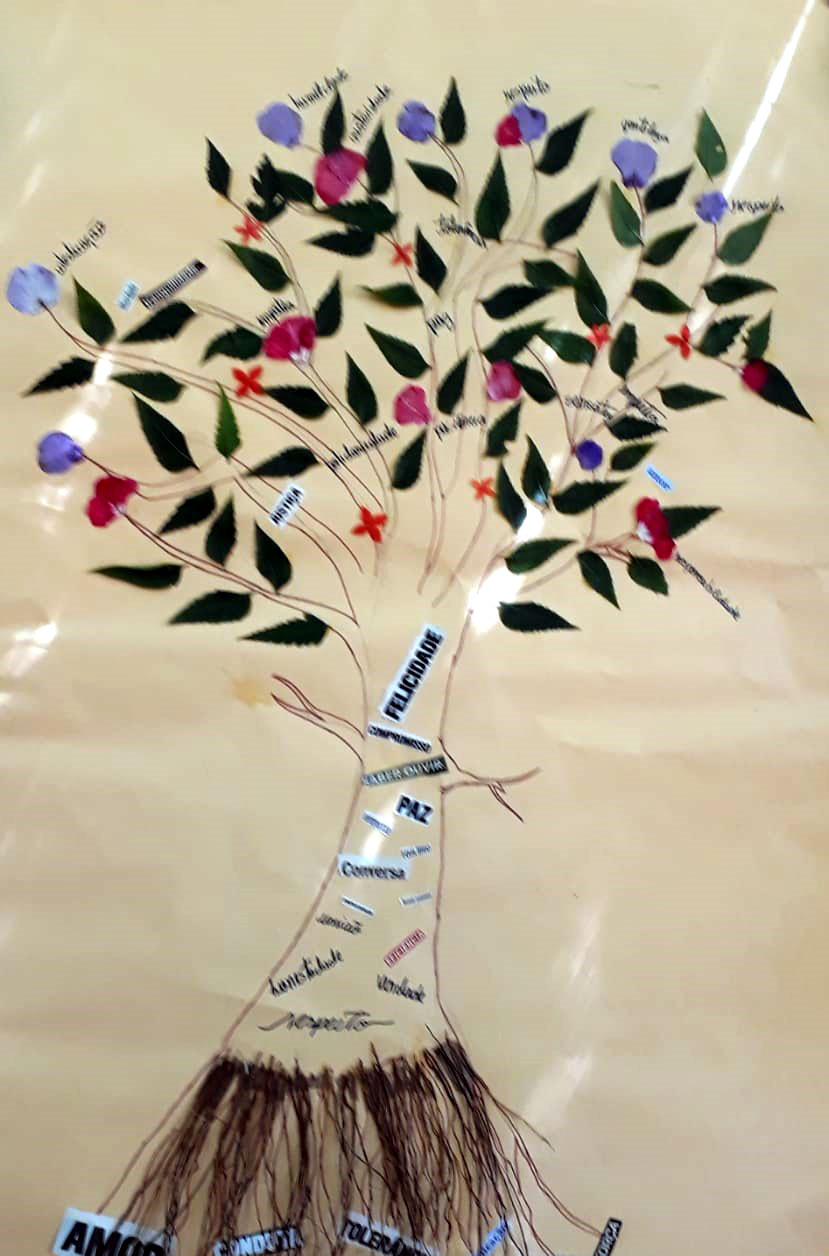 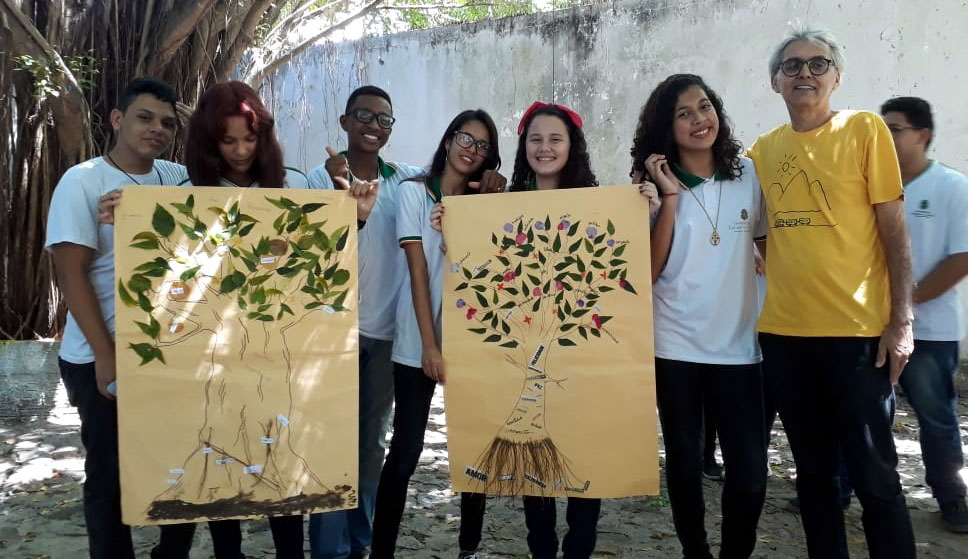 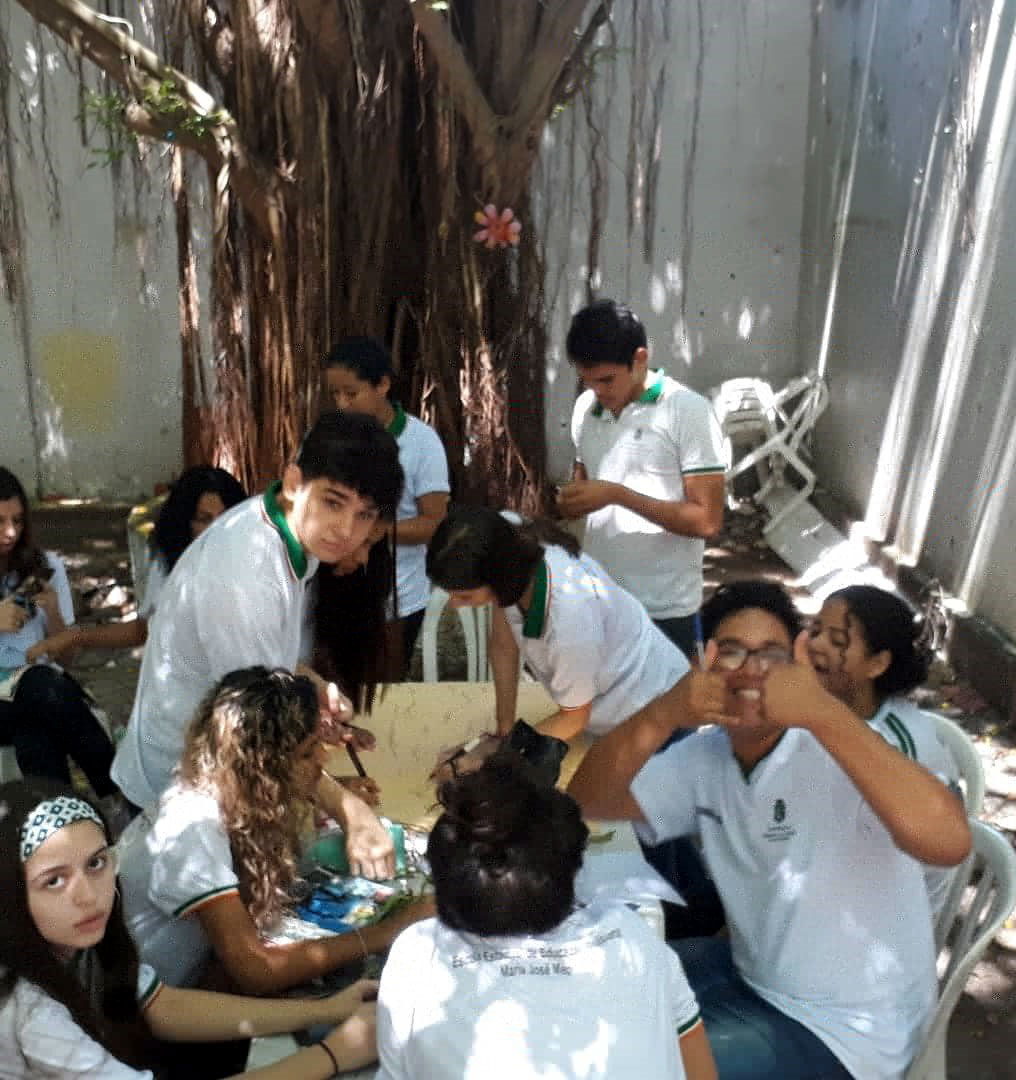 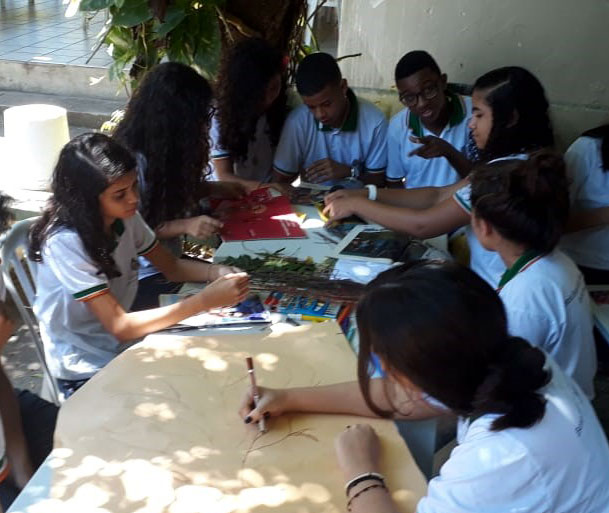 The LVE Team in Brazil, in cooperation with the Brahma Kumaris, will begin launching the Living Values Activities books in Portuguese as e-books in late October. They will be making these available free of charge.

An Excellent Article on Education, Values and Teens by Two Leading LVE Educators

An article on "Education, Values ​​and Juveniles Transgression," based on the experiences of two leading LVE Educators in Brazil, Paulo Sergio Barros and Francisca Valdelice Araújo do Vale, was published by the Federal University of Ceará in their Culture of Peace Book.

The beginning and end of the article are translated from Portuguese below to give you a taste of the topic … and entice you to read more! Should you wish to read the entire thought-provoking article, you will find it on the Country Report page of Brazil. It is quite easy to translate on Google. Thank you for your wonderful contribution, Paulo and Francisca.

The article begins: “The problem of human relations in the academic sphere has been a theme of many reflections and studies by researchers and educators. Understanding this process implies models of coexistence that presuppose certain values, forms of organization, systems of relation, norms to resolve conflicts, ways of expressing feelings, linguistic forms, social and educational expectations, etc. (Jares, 2008). For this reason, education based on human values ​​is primordial for a humanized coexistence as a way of dealing with the banality of multiple forms of violence in the school context.”

“Final Reflections: We conclude this article with Temporetti's reflection in which he states that: ‘Educators and educators should be thought of as they are: an interrelated unit of unequal and asymmetrical components located in a conflictive institutional organization shaped in a social and cultural history.’ The author emphasizes the need to build an educating accomplice. That is to say, students who associate and become partners ... of the project formulated by the teacher that ... cooperates and accompanies the educator. Temporetti also refers to the open educator, that is, the teacher who is not closed in his ideas when he exposes, narrates or proposes activities, produces knowledge or solutions to problems: An educator for whom everything is not solved, which leaves room for doubt, uncertainty; an educator who challenges learners to participate.

We believe that the reflections of the authors, Temporetti, Tillman, Morin and Freire, open paths to change the vision of education, of relationships between people, between them and the world. In a complex scope in every way, breaking the old standards of education is something we always have to keep in perspective. Brunner (1984) states that each culture has ‘... a system of techniques to shape and enhance human capabilities. They are the values, the instruments, the modes of knowledge with which each culture equips its members’. Seen from a planetary perspective, we understand that if we walk through the field of dialogue, cooperation, acceptance and understanding, etc., then we will have seminal values ​​to enhance our human capacities. In the context of school education, for the interpersonal relationships that are woven there, these and other values ​​are fertile and vital for healthy living, even if school is an environment of constant manifestations of conflicts.”

An article on “Education, Values and Juveniles Transgression”, based on the experiences of two leading LVE Educators in Brazil, Paulo Sergio Barros and Francisca Valdelice Araújo do Vale, was published by Federal University of Ceará in their Culture of Peace Book. 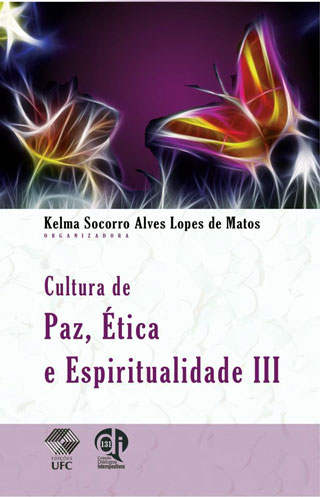 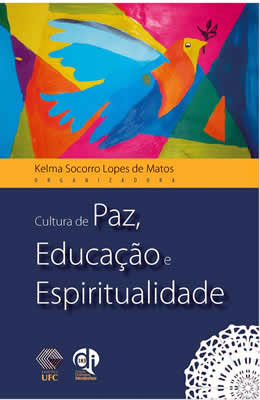 Over the past five years, the Federal University of Ceará, in Fortaleza, Brazil, has organized a Seminar on the Culture of Peace, Education and Spirituality in which researchers, teachers and students expose, debate, and experience the culture of peace. In December 2014, at the fifth annual seminar, the Living Values Education Team participated in three sessions. They presented a workshop on “Human Values” and two visualization sessions on the value of Peace. The organizer of the Seminar, Professor Kelma Matos from the Department of Educational Foundations, organizes a book of research results and teaching experiences about the culture of peace and human values. The book released after the 4th Cultura de paz, educação e espiritualidade seminar included the article, “Education and culture of peace in prisons: The experience of LVE at the School Leo Arlindo Aloisio Lorscheider in Itaitinga – CE”. This school serves 705 persons deprived of liberty. They were enrolled in forty-eight groups, in thirty-four classrooms. Running in ten prisons in the Metropolitan Region of Fortaleza, they are offered basic education, literacy to high school in form of Youth and Adult Education. The school was founded with the ideal of transforming persons deprived of liberty through the opportunity to be students who are deemed worthy of a humane education. Toward that aim, the methodology of the Living Values Education Program has been adopted by the teachers. 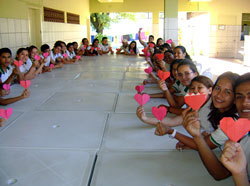 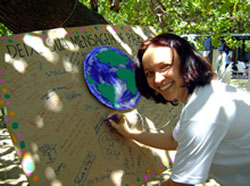 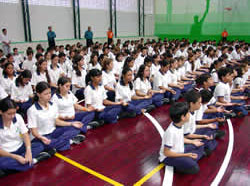 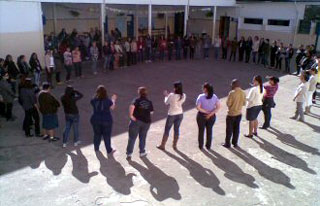 In July, a team of LVE educators delivered an LVE Workshop for educators of young children in Difficult Situations at the Municipal Theatre of Mairinque (Center of Education and Culture). Ingrid Schrijnemaekers reports, “We trained 146 people, including directors, teachers, cooks and cleaning personnel. Kindergarten, 1st and 2nd Phase people who serve children three- through five-years old from 20 public schools participated. A total of 1700 children should be impacted by the program which translates to approximately 20% of the population including adults. Because of the local situation the resource which will be used is LVE’s Living Values Activities for Street Children Ages 3 to 7
. 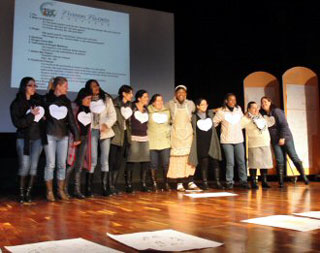 Our vision is that in ten years São Paulo will be a safer city. Several scientific studies have shown that if we want a better society, we need to invest in early childhood.

We had many special moments of personal development, adaptation, negotiation, meditation, experimentation and transformation, exploring delicate subjects such as drugs, violence, death, etc. The final result was wonderful; people were very happy.  They became creative, revealed their dedication and laughed a lot. We received positive evaluations and many seeds were planted. 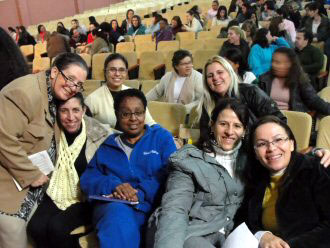 The Education Department prepared a presentation on the last day with pictures of all the activities and individuals involved, accompanied by lovely background music.

Next steps: Upon returning from vacation, the teachers plan to start LVASC activities on August 15th. We will coach them as they implement LVE, followed by a first evaluation scheduled for the end of September and a second one for the end of November. We used the research on Jardim Angela (São Paulo). It was very useful in helping us prevent implementation problems at the beginning.

The Brazil Values ​​Initiative / Project Living Values ​​in Jardim Ângela proposes that universal human values ​​education should be adopted as part of public policy and be given priority for funding when institutions fund projects in the areas of education and social assistance/ development. This proposal is based on the results of a partial evaluation which determined that:

A few testimonials from Youth Center Educators and Teen Participants who participated in the LVE study/implementation at Jardin Ângela:

"At first the youth questioned, 'Wow, I speak with peace now and I go out there and a guy points a 38 (gun) at me and then what? I'll talk about peace? For what?'  Last week, I asked them to tell me what they were feeling. These same boys who had not wanted to talk about peace or love, were the same ones who said: 'Maria, I want that this workshop, this kind of attitude (of) – I respect you and you respect me – also to happen at (my) school. I had a big fight with the director and she told me I had to leave. She asked me where I learned more, at school or in this Youth Center. I did not think twice, I said it was here ... because there they do not respect me.' This same boy who had made fun of me at first, is now practically screaming that this kind of conversation should happen elsewhere. I can see the change in the young (people)."
(Female Educator, Youth Center Riviera)

"My cousin died recently because of involvement with drugs. I started listening to the project; the stories are very touching and make you reflect about what you want for your life – the choices you make. I like the Living Values activities: sit in a circle, listen to music and reflect. Feeling that you can go beyond where you are, despite the difficulties, you can go beyond. You can overcome obstacles."
(A teen served by Sociedade Santos Mártires, seventeen years old)

"Now that I entered this course (LVE) here in the Youth Center, I got out of these bad friendships and stopped using drugs. Now I'm quiet, in my own way. I managed to leave the life of crime. I used to try but the more I tried, the more I went into a life of crime. When I was arrested, I reflected and realized that what I was doing was not for me. I wanted to make things better for myself. When I joined the course, I met several nice people and started to open myself. It was when I started studying the stories of the Living Values that I wanted, more than before, to get away from crime. Today, I am even able to make my mother happy, because, before my mother did not trust me. I also have more self-confidence. Many people do not have the experience I have. I have a story that the listener would not believe, because I experienced many things in my life of crime. It's something I do not wish even on my worst enemy."
(Teen served by Sociedade Santos Mártires, sixteen years old)

"I started to question some things about myself; tried to change a little. I am a person who speaks, I am very sincere, I say what I think, and end up hurting people. But I began to question this. It's funny because this project came here and everyone was saying about 'the students, the students, the students', but we forgot that, in the paths of our lives, we lose a lot of things, too. Then I felt the need to recover some things that I think were lost. "
(Coordinator of School Maria Peccioli)


In closing, one factor that would significantly strengthen the introduction of such a comprehensive program of values ​​education would be requiring projects requesting funding to include education in values. ​​It could even become a prerequisite for granting loans – the existence of an adequate ongoing education program in universal human values, or the commitment to implement it with the project for which resources are requested. 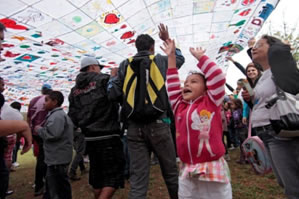 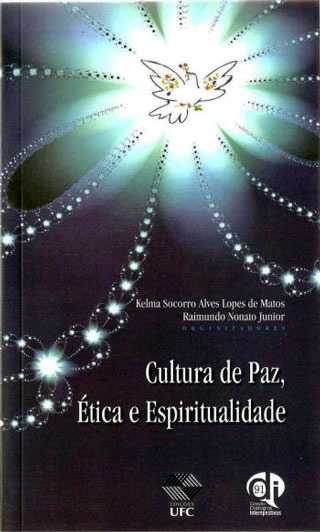 Operating since 1996, the accumulated experience of LVE in Brasil led to the following present strategic lines:

LVE Activities Book Series and the materials for Street Children and for Young Offenders are being used.

For LVE dissemination there are several projects in progress, and along with this individual requests from regular schools and NGOs are also complied with. Many trainings for new facilitators and other volunteers are held troughout the year. 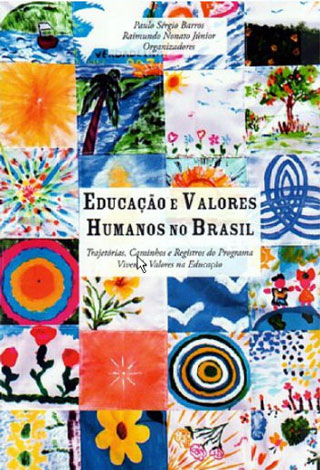 Title: Education and Human Values in Brazil: Pathways, Paths and Records of Living Values in Education.

With articles by Diane Tillman, Paulo Sérgio Barros, and Raimundo Nonato Júnior along with educators from many parts of Brazil.

This book, written in Portuguese, introduces some research and educational practices on human values in the school environment. The reports of experiences throughout the book are the result of pedagogical and investigative activities done while using the Living Values Education Program (LVEP) in Brazil.

The book was launched during the Ibero-American Meeting on Living Values Education, 17-19 July 2009, in Canela-RS, Brazil.

Three articles from the book are available in PDF Format below. 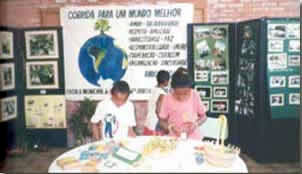