The celebration of the 20th anniversary of Living Values Education, from the 19th to 25th of November, 2016, was a labor of love of the Association of Living Values Education International (ALIVE), ALIVE Indonesia, and their partners in Indonesia: UIN Sunan Kalijaga Yogyakarta (State Islamic University “Sunan Kalijaga” of Yogyakarta), PUSAM UMM Malang (Center for Religion and Multicultural Studies – Muhammadiyah University of Malang), The Asia Foundation (TAF), Post Graduate Studies of Muhammadiyah University of Malang, and Faculty of Tarbiya and Teacher Training UIN Sunan Kalijaga Yogyakarta.

The 20th anniversary report, beautifully and meticulously prepared by Budhy Munawar-Rachman and Mochamad Ziaulhaq, begins by telling why this partnership of Indonesian organizations came together to put on this event. They note:

First, each of these organizations are committed to promoting Living Values Education as the way to rebuild the nation’s character through education.

Second, there are many educational institutions, non-governmental organizations, and even individuals that have been active in disseminating LVE all over Indonesia. These stakeholders needed a space to exchange experiences, and this celebration was the right place for it.

Third, this celebration was held in Yogyakarta. The whole chain of events was designed to maximize the exchange of ideas among international and national institutions with attention to and commitment to character education using LVE methods. And, this important event of the 20th anniversary of Living Values Education is a crucial moment to reflect on the work of LVE for the last two decades all over the world to create a global peace culture.”

On the 19th and 20th, a two-day workshop for Indonesian professors hosted by FOPMAPII PTKIN was held on the Values Based Learning Model with KKNI, Indonesian National Framework for Qualification at the Atrium Hotel.

On the 21st through 23rd, the main conference took place. Nineteen seminars and events were organized at the beautiful State Islamic University “Sunan Kalijaga” of Yogyakarta, attended by a total of 2,943 participants. The commitment, dedication, thoughtfulness and enthusiasm of ALIVE Indonesia and its partners was palatable in the way the conference was conducted. Hundreds of participants walked into the large conference venue daily to bright-faced volunteers and displays of LVE being implemented in different countires. The sessions began with music, skits and songs by children engaged in LVE, and/or artistic presentations. During the first morning, Dr. Ahmad Arifi, the Dean of Faculty of Tarbiya and Teacher Training, presented elegant commemorative gifts from State Islamic University to each Focal Point for LVE or ALIVE Associate from the ten countries presented. 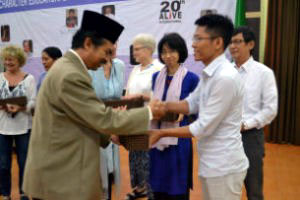 Dr. Arifi presenting a gift to Cham. Suzanne, Iluh, Sophie, Ha and Van Anh are in the background. Dr. Arifi presenting a gift to Philip. Peter, Chris, Suzanne and Raj are in the background. Backbones of LVE in Indonesia:
Wayan and Iluh Rustiasa and Taka Gana. Wayan, Taka and Iluh talking with Sophie. Wayan and Iluh are co-founders of Karuna Bali.

The other 18 seminars or events that took pleace during the main three-day conference were:

Capacity Building for Staffs of UIN Sunan Kalijaga – Faculty of Social and Humanities with facilitator: Rani A. Dewi.

Happinness Yoga with Yudhi Widdyantoro at the yard of Tarbiyah Building. 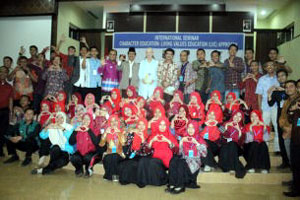 A bouquet of thanks to the Directing Team. Your love and joy was beautiful. Your values are creating a happier and more peaceful world for so many.

On the 24th and 25th, the ALIVE International General Assembly hosted by ALIVE Indonesia was held at Sambi Resort, a little more than an hour away from Yogyakarta. A lush, tropical setting was perfect for the smaller group of Indonesian LVE leaders and international participants. Peter led all in relaxing, fun and deepening activities, and excellent presentations were given by Roger, Suzane and Sophie, on the newly launched Long Distance LVE Self-development materials and LVE activities in Hungary. The amazing graphics from Vietnam were displayed by Ha and Van. (To see the graphics, please see the Vietnam item below.) During the ALIVE General Assembly, Peter Williams, who has led ALIVE with so much love, integrity and enthusiasm for the last five years, stepped down as President. In addition to gaining several stellar new board members, Hendrina Khanyile from South Africa, Roger (Raj) Miles from Australia, and Dr. Budhy Munawar from Indonesia, Chris Drake graciously astonished us all by accepting the mantel of President for ALIVE for the second time. 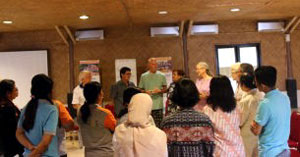 The Indonesian LVE leaders wrote the following about the lessons learned during the 20th Anniversary of LVE Celebration. They noted:

“There were several key points that kept surfacing:

One: In the parenting workshops, it was emphasized that methods of nurturing children will not be effective if parents are not aware of their values. Parents with values awareness will have better self control and be able to build more positive and healthy relationships with their children. Parents and children can learn from each other. As Diane Tillman put it, “Education is the most powerful weapon you can use to change the world.” (Tillman, 2014).

Two: An interfaith peace education is essential to stimulate peace within the very diverse Indonesian community. LVE has a very strategic role in raising people’s awareness of common values shared by all parts of Indonesian society, in order to strengthen unity of Indonesia.

Three: Indonesia already has a good model of LVE development for conflict resolution and post conflict trauma healing, as developed in Ambon area.

Four: Currently, some of us have deep internal dissatisfaction, due to only knowing the thin outer layers of life. There are many unanswered questions, such as Who Are We, What’s Our Purpose, and What’s Our Role in this world. LVE emphasizes that life has meaning, so each educator can encourage individuals and communities to define their meaning. Like a heart, education encourages each person to understand life to be able to nurture humanity.

Five: The success of combining LVE methods with Islamic education system in a number of madrasah or boarding schools has been proven through the behavioural changes and academic achievements. This success makes it possible to propose this model to Islamic Development Bank in order to a reach wider audience.

Six: Each ALIVE Associate / Focal Point for LVE needs to continuously develop learning models that fit the social and cultural context of their country. These models will need a way for planning and evaluation to ensure the lessons from implementation can be learned properly.

Eight: LVE trainers and facilitators will need to increase the number of books and international journal submission to disseminate LVE on a wider scale globally, especially among education stakeholders.

Nine: LVE’s Long-distance learning model, as practiced by ALIVE Australia, can become an alternative to reach children in remote or long term conflict areas. This model can be used as reference material for facilitators in those areas, such as Pakistan, Syria, etc.” The July 2014 LVE European Conference on the Greek island of Zakynthos Over 70 delegates, from near and far, gathered on the beautiful island of Zakynthos to share their best practices. The 100+ pages proceedings echo the excellent Living Values Education creativity, learning and research that uplifts our understanding of 'Ancient Wisdom for Modern Times'. Special congratulations are well deserved to Xanthie, Anda and the organizing committee who welcomed and hosted everyone so well.

Ten International Living Values trainers from Europe and further afield were also in attendance to add to the occasion including:

Helen Sayers from Oman who shared methods of how to get to know one another in very creative ways, how to sustain alertness through the 'Rain Dance' and how Ubuntu is being very well received.

Cecile Lecomte from Reunion Island shared how the program on the island had reduced negative behaviours to positive behaviours to such an extent that the French government has recognized the outcomes as very good practice on their website. The creation of a 'Values ruler' indicating the degree to which student's learning is understood was very well received.

A particular highlight of the conference was an evening session at Zakynthos Library that houses many values stories and conducts evening programs for students who wish to know more about values.

Since the 2014 European gathering, Living Values Education continues to grow from strength to strength in Greece and within Europe.

You are most welcome to read the proceedings and to use/ adapt them to your own setting, to contact our International colleagues directly – and, of course – share your own stories with the Living Values Education family.