Making Values the Root of Education and Social Transformation

The Jesuits and Brothers Association in Minia, the ALIVE Associate in Egypt, sent in the below LVE report for the period of January 2016 through August 2017. In addition to sharing their activities, they reflect on some of the factors in the change process since the revolution of 2013.

“Since the Egyptian revolution in 2013, Egyptian society has been trying to reform itself to get out of the state of apathy and create real participation in the change process. This has affected the overall context of relationships and the value system. The program has tried to play an active role in rooting the positive values through institutions working in the field of education and development in an attempt to make a social equation between the desire for democratic and social transformation and lack of values.

The community suffered from two contradictions: intense desire for freedom and extreme fear of freedom, the desire to practice values and to negate all ethical frameworks. Freedom does not come once but should be learned, thus, the Living Values Education Team of the Jesuits and Brothers Association has tried to spread values through a series of workshops adopted by educational and developmental institutions to instill and root human values.

In Egypt, the program has received many training applications from various developmental and educational institutions. The LVE program team in Egypt has responded to these requests through a series of trainings in partnership with many of these institutions to achieve the value equation in the local communities in which these institutions operate.

The activities of the program:

Trainings with the different institutions:

The program has implemented eight trainings for educators from different institutions (two to three days for each training) with 234 trainees.

Participants in the final evaluation of the program expressed the need of the community to spread the values and the impact on the program at the personal level, which they said was an opportunity to express something deep inside them; the trainings succeeded in creating an emotional state which helped trainees absorb the reality of values.

Some of the participants' comments:

‘This training was an opportunity to review our personal values in the context we live in.’

‘The program is good, but it`s hard to live according to it because of the society`s changing values.’

‘We lived a value dream for three days; we wish this dream could continue.’

‘We already have these values deep inside us but we must dig in ourselves to find it.’

‘Values are like plants; they should be nurtured so as to bear fruit and see the fruits of our lives.’

‘Practicing values builds us as humans before it builds the community.’ 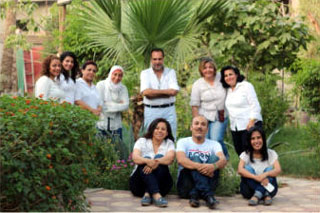 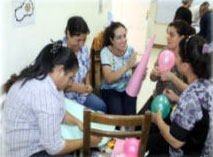 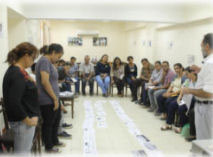 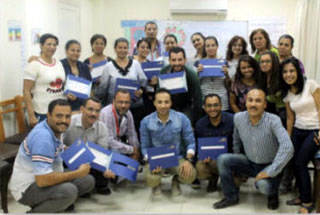 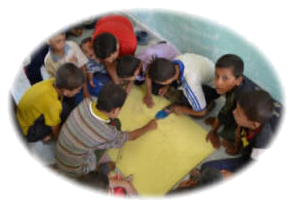 Development From Youth to Youth Project 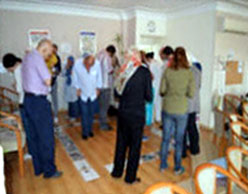 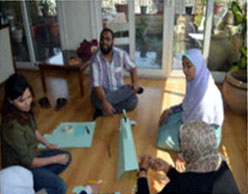 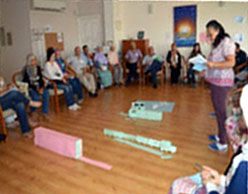 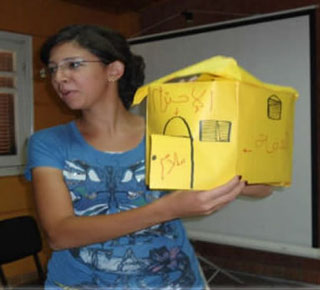 On the other side, the program organized a festival for children in Aswan for 150 children belonging to ‘Access to drinking water for Elnaseria’ project. This festival was implemented with the participation of the project`s facilitators.”

Three Workshops in Cairo Create a Group of LVE Co-Trainers 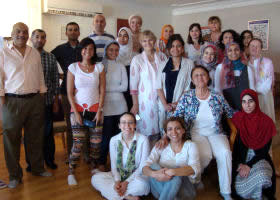 A group of 20 educators participated in a Living Values Education Train-the-Trainer workshop over a long weekend in Cairo in February, hosted by the Egyptian Society for Life Skills and Self-Development in Heliopolis. Most of these participants had already completed a LVE foundation workshop the previous year facilitated by members of the Jesuit Brothers from Minya, Upper Egypt. Helen Sayers, the President of the ALIVE Associate in Oman, came to facilitate the training,  an Associate of ALIVE in Oman, came to facilitate the training, joined by Duaa Mansour, Focal Point for LVE in Kuwait and an art teacher at Kuwait American School. 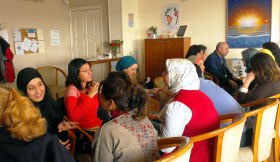 As a refresher, the facilitators worked through a typical LVE foundation workshop, making sure that trainees thoroughly understood the methodology and the process of integrating values in education, placing emphasis on ‘exploring, expressing and experiencing’ values. The rest of the three-day workshop was dedicated to exploring the qualities and skills of a trainer, and preparing presentations and workshop sessions. Trainees had a practical opportunity to co-facilitate a half-day introductory workshop for an invited group of educators and other interested individuals.

Helen was invited back in June for a three-day intensive follow-up capacity-building LVE Workshop leading to 13 educators being awarded with the certificate of 'LVE Co-trainer'. The LVE team in Cairo are now busy coordinating a variety of activities at schools and in the local community with the aim of helping to reawaken and sustain the elevated values of their great nation. 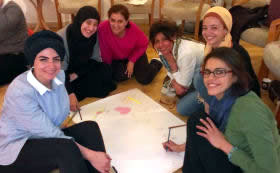 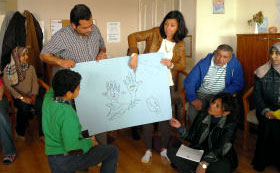 Since we became the representatives of the program in Egypt, we began to form a group of volunteers working in the education area as well as those working in the social development area, to be able to cover all training requests from diffident organizations. And we began to think about the criteria to spread the program in the country. Till now there are many training requests for the program as we will explain in details below.

Activities implemented during the report period:

Forming a group of trainers:

Holding different trainings for the educators in different organizations:

After advertising about the program we got many training requests to train the educators who are working with children in different projects and programs as follows:

Training held for schools and other organizations

The first Living Values Educational Program (LVEP) Educators' Training that took place in Egypt was held in Alexandria in January 2000, hosted by the Jesuit Fathers. Since then, the program's activities in Egypt have steadily increased.

Each year, a number of Educators Trainings take place in schools and educational Institutes upon their request. Follow-up meetings also take place for Educators that apply the living values activities with children.

In 2003, a comprehensive Train-the-Trainer (TTT) program has taken place with 15 carefully selected educators and educational psychologists. The aim was to prepare a team of LVEP trainers in Egypt in order to accommodate the unfulfilled schools requests for LVEP training. The TTT was sponsored by the Jesuits and Brothers Association for Development in El-Menia. Since then, those trainers co-trained in many of the trainings that took place. The Jesuit and Brothers Association has also committed itself to host a once-a-year Educators training in which Educators from several Educational Institutes can attend.

From July 2006 till now, several educators training have taken place for the staff of some schools as well as development associations working in the field of education. Educators from Sadat Language School, Notre Dame Schools across Egypt, Al-Hoda Language School, schools of Upper Egypt Association, Coptic of Evangelican Organization for Social Services, Lekaa Association, Key of Life Association, Nahdet Misr Association, and from 10 public schools in 5 villages of El-Menia within the "Upgrading Training and Educational Skills" of the Jesuit and Brothers Association, were all trained to use the program with children of different age groups.

This year, LVEP was presented in the Seventh Annual Educational Conference of the Advance Society that took place in the British School in Cairo in March 2007. The Conference was organized by the Learning Resource Center and sponsored by several bodies including the British Council and the Cairo Office of UNESCO. The Conference focused on effective educational tools and techniques for children with learning disabilities. LVEP methodology will be again presented in iEarn Conference in July 2007.

LVEP is now seen in Egypt as a valuable program. This is resulting in more trainings being requested and more trainers preparing themselves to fulfill the increasing demand.

One teacher in El-Menia explained how one day she had to leave her class of primary level children unattended for sometime; as she was walking back to the class, she expected to hear a lot of noise but to her surprise there was no sound coming from the class. When she reached the class, she found that one of the students was standing and conducting a guided relaxation/focusing exercise for the rest of the class while all the other students were quiet and calm and enjoying the experience.

Another teacher stated that children in her school quickly learned the conflict resolution steps and are now applying them very effectively; she has noticed a reduction in level of conflicts among students.

One teacher stated that a girl in her class who used to have the highest record of absence in previous years, recorded the highest rate of attendance after applying the living values activities with the children in school. Another student was on the verge of leaving the school due to his poor educational performance, became attentive in class and scored better academic results in school after applying the living values program.

Several teachers have stated that LVEP has helped them personally to discover their own inner values and self-worth and to have better relationships with the children as well as with their colleagues.